After a long day at Movie World it was quite lovely to know that we would be enjoying a delicious 3 course meal and I didn’t have to prepare it. We didn’t really know what else to expect so hurriedly dashed through the rain into  the world of the high country.

Our tickets were checked and we were issused with our cowboy hats with a red band, indicating which side of the arena we were to be seated on. While we waited for the doors to be opened we wandered around the huge ‘hut’ and enjoyed the photos, memorabilia and atmosphere. 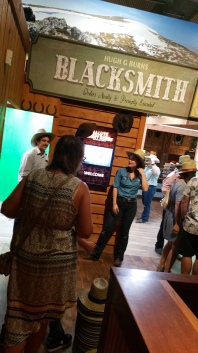 Above the bar was a photo of Craig’s Hut (the one from the Man from Snowy River movie). The kids were so excited when they saw it and proclaimed “we’ve been there!” The high country was still fresh in our minds as it had only been a couple of weeks since we had been there. There was enough time to meet some of the animal stars and squeeze in a quick “home among the gum trees” dance before the doors were opened and we entered the arena to find our seats. 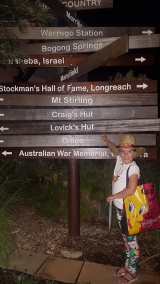 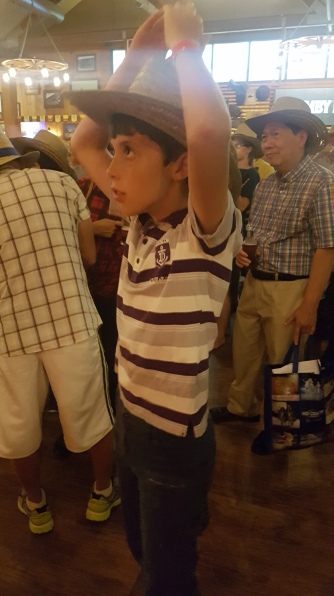 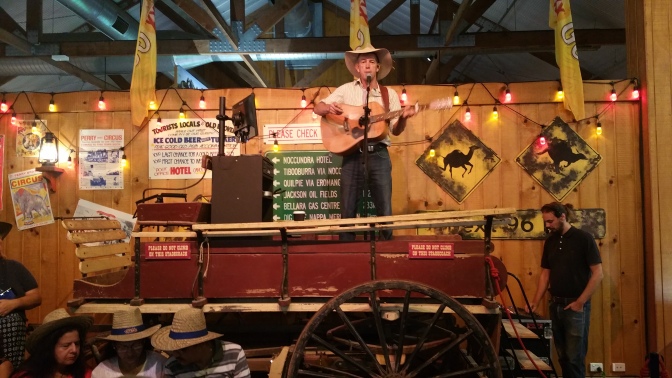 We were in the back row (only 5 or so high) which was actually great as we could see all the action really well. As we sat we were greeted by the friendly waitstaff with our first course of the evening, a delicious pumkin soup. After convincing Zach to try some it turns out he actually really enjoyed it. We were long finished by the time everyone was seated and the show started.

We were introduced to the characters as they set out to the high country for the weekend. Stories of legends from the country were told throughout the production with a moving tribute to the light horseman too. There was amazing horsemanship, lighting effects, humour, visuals on the moving wall and crowd interaction.

Mains was served during a scene and was incorporated into the story. Steak, mash, beans, corn cob and honey carrots. YUM!!! Sweets was amazing too. Apple pie with cream and salted caramel sauce. YUM!!! We were all so full I didn’t think we’d need to eat the next day.

The kids absolutely loved the show and having been to lots of the places we were now seeing and hearing about again it was tying everything together beautifully. Some of the songs were so catchy Clarissa is still singing them.

Unfortunately we were not allowed to take any photos during the show but if you follow the link here you can get a taste of what we experienced. If you are ever on the Gold Coast it is well worth the money for a wonderful evening to remember.

Thank you Outback Spectacular we had a fantasic night!

2 thoughts on “The Outback Is Spectacular”