We woke up to the sounds of a busy town (something we are no longer used to) and packed down in record time. After breakfast and a quick bounce on the pillow we set off towards the home of country music. On the way, we discovered we had spent the last couple of nights literally ‘Beyond the Black Stump’!

We arrived in Tamworth around 1pm and searched out a bakery to satisfy Adrian’s pie craving. We took our yummy pies and headed to a playground we had read about the day before. It was awesome! The kids couldn’t eat quick enough. It had a skywalk, big slides, a water park, things to spin on and so much more. 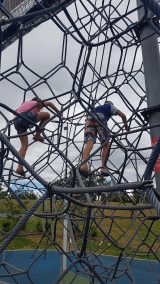 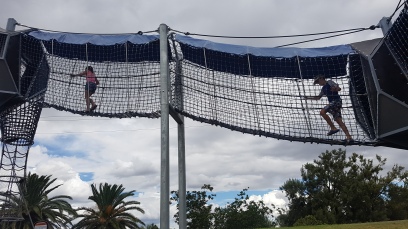 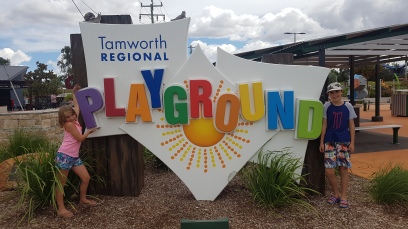 The weather was looking average and a bit of rain fell but it didn’t help the growing humidity.  We left the playground and headed off to find the golden guitar. A quick drive saw us taking a selfie with the big stringed instrument. 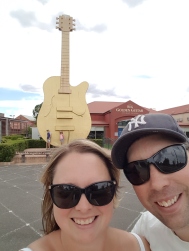 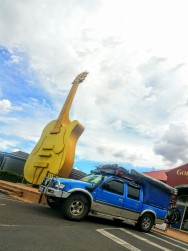 We enjoyed a wander through the visitors centre and looked at all the guitars signed by some of Australia’s greatest country musicians. 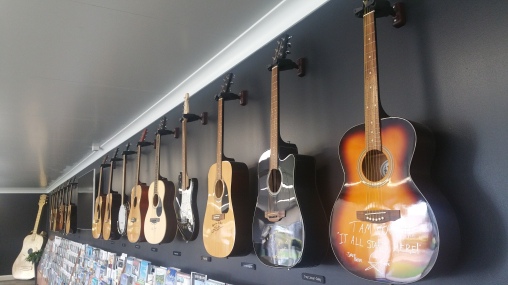 The planned rest stop for the night was on the side of the highway with blue metal underfoot…yuk. You have to be super flexible with a trip like this 😉. So we drove on and found Bendemeer, a lovely spot on a river bank with flushing toilets. The kids had a great time playing in yet another creek, although Zach got himself stuck on a rock and it took him a few minutes to work out how to get back! 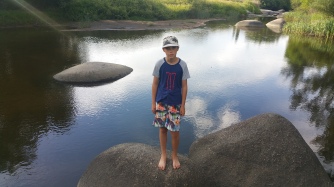 Despite the slight possibility of rain, we decided not to put the fly on as we were only stopped for the night and the sky looked clear. It may have sprinkled slightly through the night, but we awoke to a dry tent and clear skies.

With sunshine above us we set out the next day for Coffs Harbour. The drive was to be 4hrs but with a missed turn it became 5. Although  we did see cattle being grazed right across the main road!

The sun was long gone and for most of our drive Blu enjoyed a wash. We arrived in Coffs thinking it was cool due to the rain and the lovely aircon we had pumping in the cab. This was not so. It was kind of like a wall of sticky heat as we stepped out to stretch our legs and grab a late lunch.

We headed into town to find a quilt shop to peruse. We found a little one which was jammed full of fabrics but not feeling 100% I couldn’t think of colours that I needed for the travel quilt. I settled on a few Tilda fabrics (my favourite designer) and headed out to meet the boys.

Our last stop was the Big Banana (must be said in a Minion voice 😄). It was now teaming down with rain so we took the worlds fastest selfie and got out of the rain. At this point it was 5pm, wet and I felt fairly average so the thought of setting up the tent for the night was very unappealing. 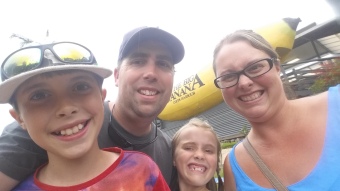 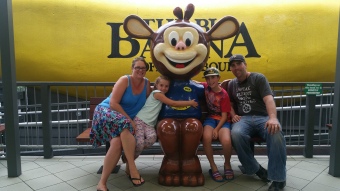 Adrian had found a stop about an hours drive north which we hoped would take us above the rain. We drove past sugar cane fields which was cool and arrived at a muddy site next to road works. Although it wasn’t raining it obviously had been. Again being flexible we made the family decision to try another spot just 10 minutes up the road.

In order to get to this showground site as we needed to cross the river on a ferry similar to the one we used in Adelaide.  It is such a funny feeling being parked but moving across the water. With night closing in we pulled into McLean Showgrounds and sussed out the best place to pitch. Again not raining but lots of mud.

While Adrian wandered checking for a flat site (the last few nights had been slopey and our bed had another leak…grrr) in hope of a good nights sleep the kids and I stood in awe staring at the sky as literally hundreds of bats took wing. I have never seen anything like it. Very cool! 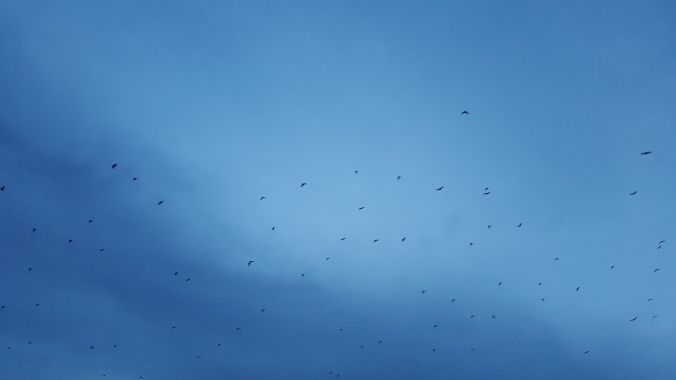 We decided to risk it again and go flyless so that we could eat and go to bed (it was now about 8pm and very dark). The risk did not pay off as the heavens opened and the thunder rolled in. With Clarissa tucked under my wing and Adrian wiping the roof on the inside to get rid of the condensation, sleep became a far off dream. We spent the rest of the night stiring at every drop in the ear or face.

At dawn we decided  to cut our losses and pack up early. We packed as quickly and quietly as we could with everything being so wet. The treat for the morning was a hot breakfast at Maccas before our drive to the Gold Coast. It was heavenly to sit and enjoy the dry. 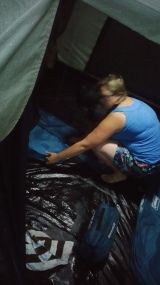 With full bellies we set out on the short 2hr drive across the border. Before checking in to our site we headed to a camping shop and got a new bed on warranty.  Hopefully this one will be much less faulty. With huge rainfall forecast for our whole week on the Gold Coast we rang ahead to see if we could check in early to let everything dry before it rained.

We couldn’t selfie the border crossing this time, as turning the wrong way around on the M1 in the middle of the Gold Coast might have caused some issues with the local law enforcement, so we had to settle for a quick drive by snap.

We arrived to hot sunny weather! It didn’t take long for the beds, sleeping bags, towels, pillows and tent to dry. After a quick dip in our luxurious pool we headed into town to restock the food supply.  Before dinner Adrian headed out to pick up Blu’s new side steps (the old ones had been dented on the terrifying rock tracks of the high country) and the kids and I headed back to the pool. 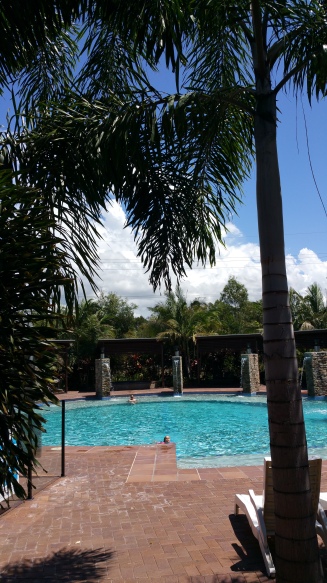 After a swim and a shower (In the most amazing caravan park toilet block we have ever seen…there are tropical fish tanks and chandeliers!) , with darkness closing in, Adrian finally arrived back as we lay in the tent listening to the rain. We quickly prepared some dinner. As our body clocks we still 1hr ahead it felt like 9pm. It was no wonder we were hungry! 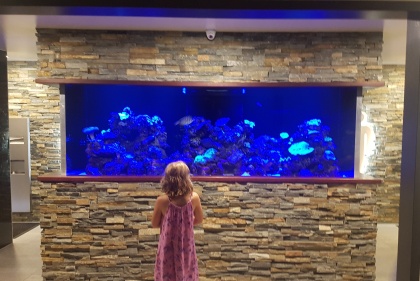 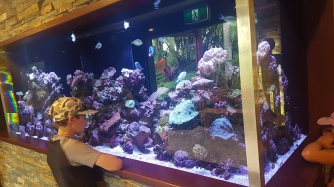 Tired after a big day and time change we drifted off to sleep with the anticipation of our first theme park in the morning…..but first more rain (With the fly on this time!).

2 thoughts on “Rain, Rain Go Away”