It is with much excitment that I write this post as it brings us up completely to date! Yay!

It was with great anticipation that we packed up camp at Daly…it was our last big drive day for a while!

About an hour into our journey we stopped at Mataranka thermal springs for a dip. It was a like a little oasis in the middle of all the red dirt. The spring bubbles up from underground at a whopping 30 million litres per day at an average temperature of 30°! It was rather peaceful and scenic to float in the clear waters surrounded by the trees. 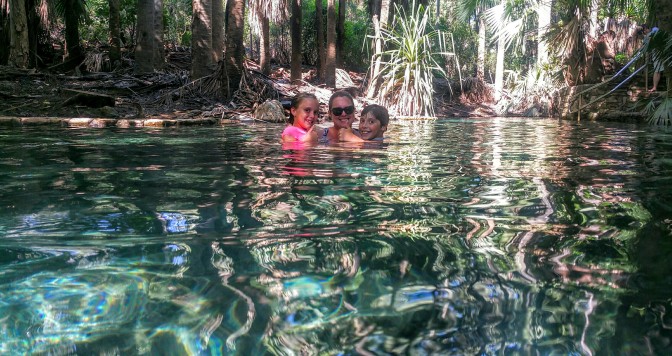 Back on the road with  morning tea snacks we pushed through to our camp desination just outside of Darwin. Our only stop was to refuel Adrian with some ice coffee and to buy our Kakado park pass while it was still March (once it ticks over into April it costs more).

We arrived mid-afternoon at a farm stay for a couple of nights. It was a hobby farm and the owners were very friendly and welcoming.  After our tour of all the animals we set up before Adrian and the kids went for a swim. This was not so appealing to me as next to the pool were cages with various snakes in them….yuck. 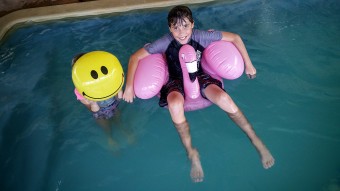 The night bought with it a big storm and saw us taking shelter under the veranda in the camp kitchen with the 6 other backpackers who were also staying. Our tent can take a storm it was just we weren’t sure about the trees around us as the owner had had one come down the week before.  This was not a good start to the night as we were all exhausted and needed a good sleep.

The next morning was brighter and after getting caught up on the washing and feeding the animals, we decided to head into town to one of the free water parks. It was so cool! A great water playground with the essential tipping bucket and 3 aquatubes all free! The kids and I had a ball. Adrian however had been hit by a stomach bug and was trying to sleep it off in the shade. 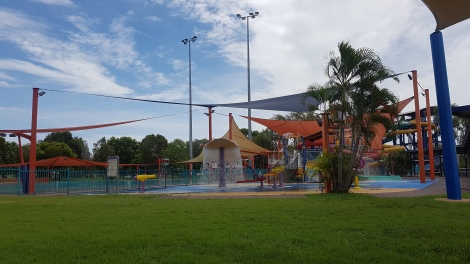 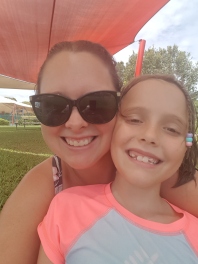 Another big storm rolled in, this time about 3am, so back to the veranda for a few hours of restless sleep on the couch.

The next day we all felt a little flat as we packed and headed closer into Darwin to our new site for the next while. I think we were all feeling the effects of a busy schedule on the road.

Pulling into Free Spirit Resort was like a little slice of paradise! There was lovely grass and palm trees all around. The staff were amazing and super helpful. We all needed a bit of luxury (but still very affordable) after our big few drive days. After setting up the tent we headed to the pool to cool off.

Adrian headed off to the Dr as he was still really unwell and had developed a troubling painful rash on his neck. An hour or so later he returned with a couple of creams and not many answers (It has cleared up now, but we still don’t know what caused it). Early to bed for all.

The next morning saw colour back in Adrian’s face and we decided on visiting the Parap markets in the morning.  They were mostly food stalls and it was extremely hot but it was nice to wander anyway.

We found a couple of camping stores to check out and found a new fan! Yay we can sleep well tonight.  Unfortunately by the time we arrived back at camp I had now come down with the dreaded lurgy.

Sunday saw us doing not much of anything as I was really crook and Adrian still drained. The kids made some new friends which meant we could rest and recover while they played in the trees and collected frogs.

Feeling better for a few forced rest days we went into Darwin for the first time and visited to Darwin Military Museum. It was interesting to learn about how involved Australia really was in the war and to see displays and artefacts. It also focused on the bombing of Darwin which really started things off here. 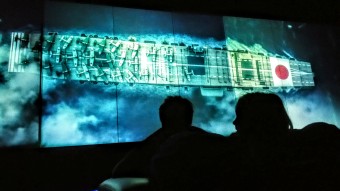 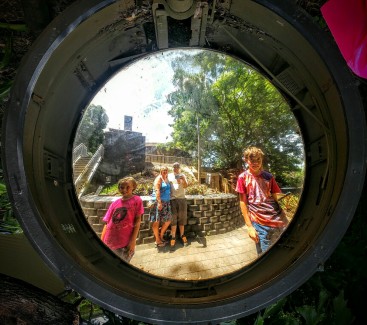 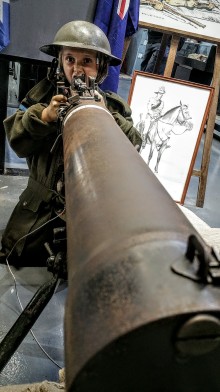 After some more history it was time to check out the second free waterpark. Not as big as the other one, this one did have a 6 lane race slide.  The boys were onto it but Clarissa a bit more cautious while my tender but healing tummy was not lying on a mat and being bounced over humps as I hurtled towards the bottom. I opted for taking the photos instead. Eventually (40mins later) Clarissa went down after a very patient lifeguard must have said the magic words. We couldn’t get her off after this going half a dozen times before we eventually had to leave. 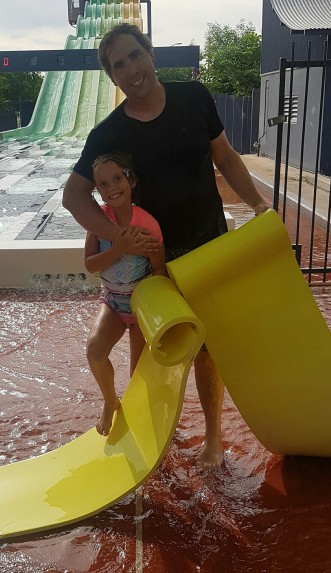 The next day we divided and conquered. The boys went down to the Adelaide River jumping crocs. They had a ball seeing these massive beasts up close. 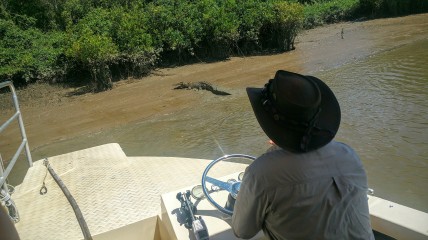 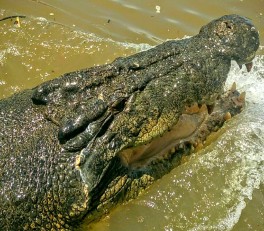 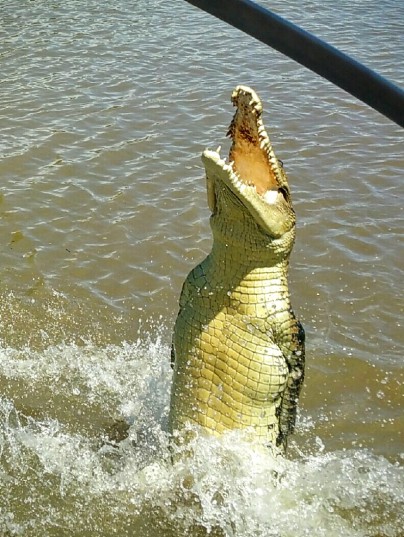 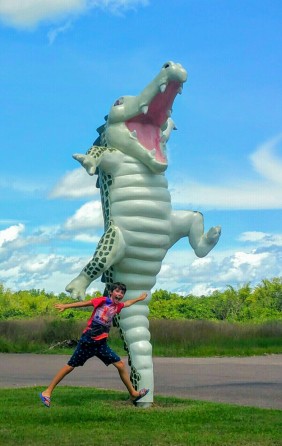 Us girls went for a much more relaxing option of shopping and a pedicure. Bliss. Love spending time with my little miss. 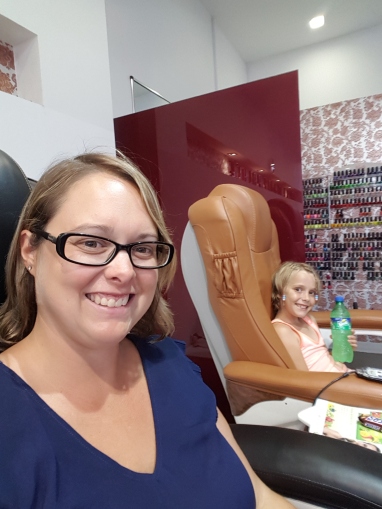 We all ended up at the movies with the girls watching Beauty and the Beast while the boys saw Lego Batman. A great day out. 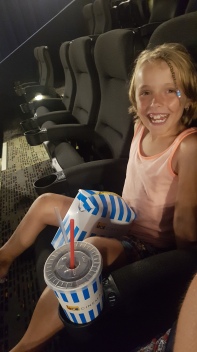 Clarissa and I had found a travel friendly (small and slim in a good carry case) game of Kubb which we enjoyed playing when we returned to camp. We ate doughnuts for tea (hey they were free and we are on holidays so why not) and headed to bed for a good nights sleep. 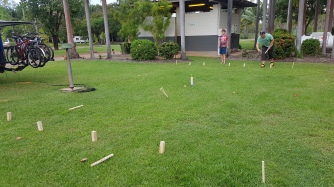 We woke planning  on checking out Litchfield national park but Blu had other ideas. His starter motor was dead. So change of plans and another pool chilling, LEGO playing day was had instead. This worked well as I was still not 100% and must have needed to rest again. Blu came back all fixed and happy by the end of the day. 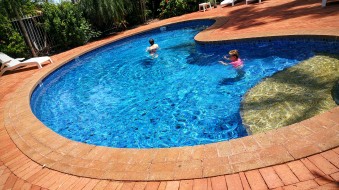 Our last day here in town saw us check out the WWII oil storage tunnels. They were built to store oil after the bombing had destroed the above ground ones but they took so long to be built and leaked so much that they were never used. Cool to explore though. 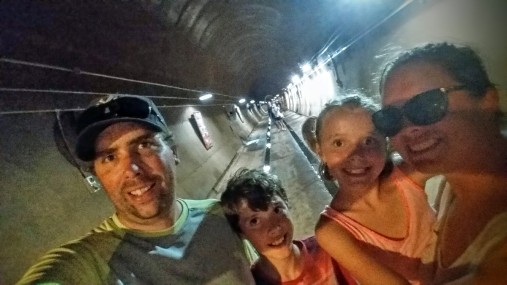 After a final wander at the shops we headed back to the waterpark for Adrian to have a go on the slides he had missed out on the first time round. After an hour or so we jumped into Blu and came back to camp via the camp shop that had the pots I had been searching for for years. They are square and have a removable handle so they pack extremely well.

A great end to our time in Darwin.

One thought on “The Land of the Never Never”