The one good thing about waking up in the car is that it makes getting on the road really easy! A quick toilet and a bite of breakfast and we were on our way.

We paused at the Undara Lava Tubes, however, their morning tours didn’t start till April and we didn’t want to hang around for hours waiting and not reach our planned stop so we continued on. 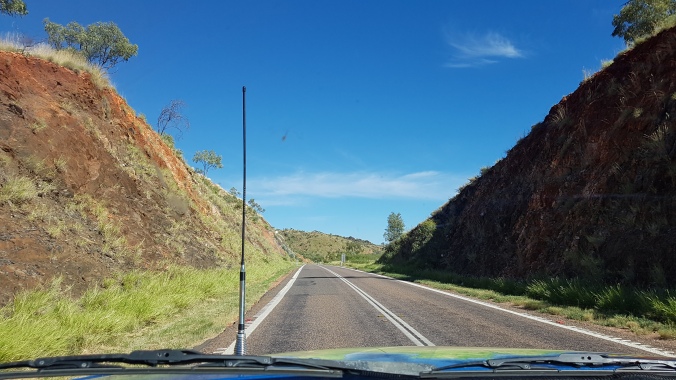 We passed through Georgetown and reached Normanton, just south of the Gulf of Carpentaria for lunch and sussed the locals out on the condition of the dirt road through to Burketown. After a quick call from the local store owner to the local Constabulary (The Police Station is only open Mon-Thurs, 9-4 but locals have their back channels :p ), the verdict was rough but passable and open.

We stopped a little way down the road to visit Burke and Wills northern most campsite before continuing… But not for long. About 50kms in and 5kms after it turned to dirt, there was a big “Road Closed” sign blocking our way, it seems the local council and the coppers weren’t communicating very well! A council worker who was out fishing near the closure informed us that while the road wasn’t flooded, the council were still filling in washouts from the previous weeks rain. Grrrrr…

The inaccessibility of the road through to Burketown meant a 50km back-track, followed by a 300km detour on the main highway to the south. As it was 3pm by this point we wasted no time in turning around and keeping moving.

We were now properly into road train country and the kids loved seeing the big 3-4 trailer rigs come barreling past us at full speed!

At 6pm we arrived at the Burke and Wills Roadhouse and set up for the night. As the sun went down, the roadtrains all pulled out and the bugs, tree frogs and cane toads came out of hiding. Much to her disgust, Chelle stepped on a cane toad on her way back from the showers, fortunately she was wearing thongs, so the toad came off second best!

We woke up early at 6am to try to get a jump on the heat of the day and discovered that the Grey Nomads who had been sharing the campsite were long gone. Talk about early risers! We drove south for a couple of hours then turned west towards Mt Isa for lunch. The landscape was quintessential outback, complete with cattle next to (and occasionally on) the road. 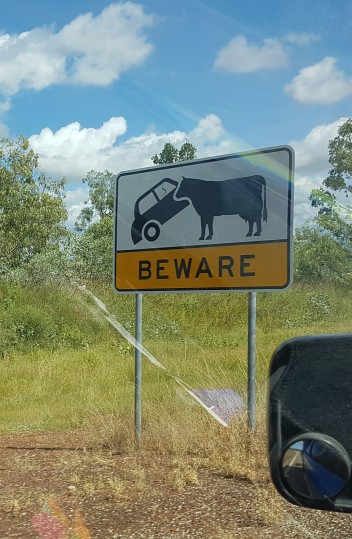 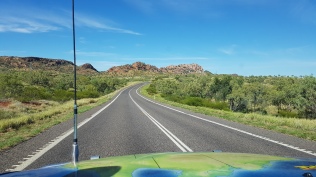 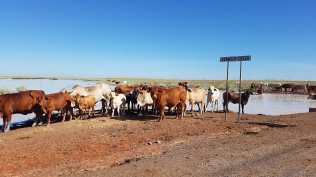 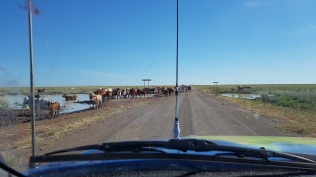 I couldn’t help myself pausing to take a few shots of a windmill while Chelle and the kids and Blu rested in the shade of a gumtree. 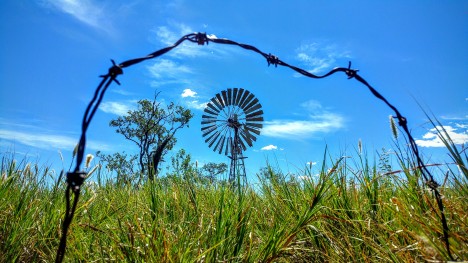 When we reached Mt Isa we visited the Riversleigh Fossil center and had a fascinating look at how they disolve the rock to remove the fossils. The kids also had a great time meeting the labs mascot… A white rat named Riley! 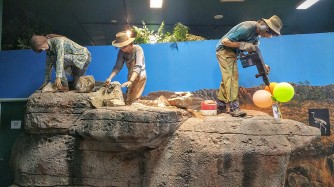 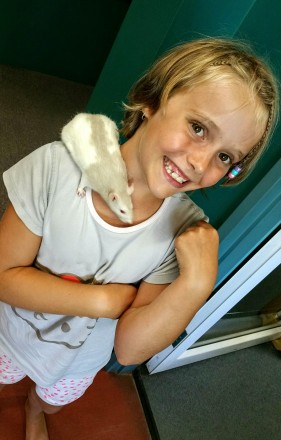 Super Stunners from HJ’s and Rooster Rolls from Red Rooster rounded out our brief stop in The Isa and it was back on the road aiming for the Barkly Homestead. As we headed out, the termite hills that had been dotting the landscape for a while increased in size to be up to 6-7ft tall! Not only that, but some of them were dressed up in tshirts and hats! Outback Humour! 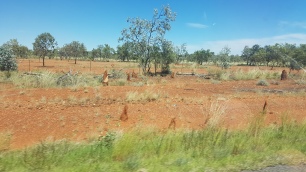 As we crossed the border into the NT (We have now been in every state and territory on this trip!), the speed limits increased to 130. This made no difference to us other than the frequency with which we were overtaken (Blu maxes out at 110 on a hot day) 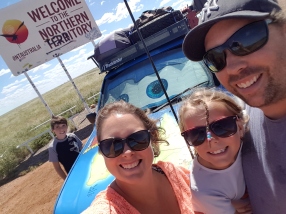 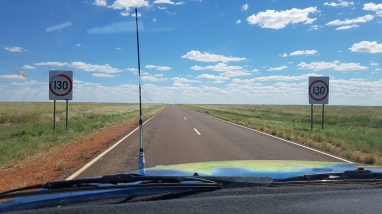 Almost immediately upon crossing the border, the landscape changed to wide featureless plains with only the occasional tree or stockyard breaking the horizon. It was easy to see why they call it big sky country!

Arriving at Barkly at a sensible 4:30pm, we made camp and promptly jumped in the pool which felt more like a warm bath after sitting in the full sun all day. It was a pleasant change when the sun went down, and evidently the grasshoppers thought so to! I have never seen as many in one place as we had hanging around our awning that night.

Most mornings, the previous nights insects are long gone, not so the grasshoppers. There were still at least 20 hanging around when we went to get breakfast, a quick flick with a stick and they headed back up into their trees.

Rather than take the Stuart Highway, which is the main road north, we decided to take the Tablelands and Carpentaria Highways and meet the Stuart as far north as possible. The ‘Highway’ needs to be taken with a grain of salt as they are both single lane sealed roads with wide dirt shoulders for pulling onto when passing an oncoming vehicle or stopping on when the oncoming vehicle is a road train. It wasn’t quite the offroad adventure I had hoped for on the Savannah Way, but it was definitely more fun than just shooting up the main highway! 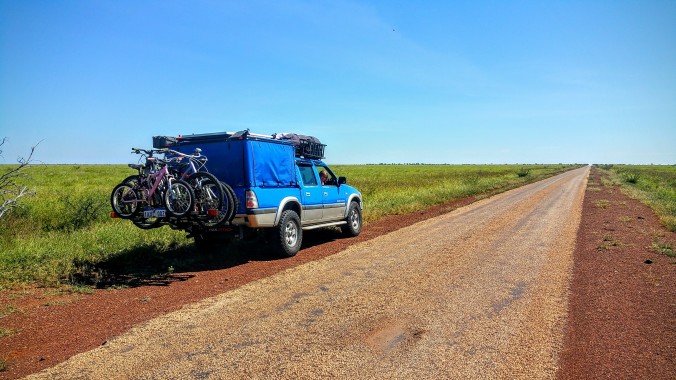 Every puddle on the road seemed to be glittering with something and it took us a few minutes to work out it was butterflies having a drink! We paused to get a closer look. Up close, it was one of the most amazing sights we have seen all trip! Sometimes you have to take a moment to look closely at the little things. 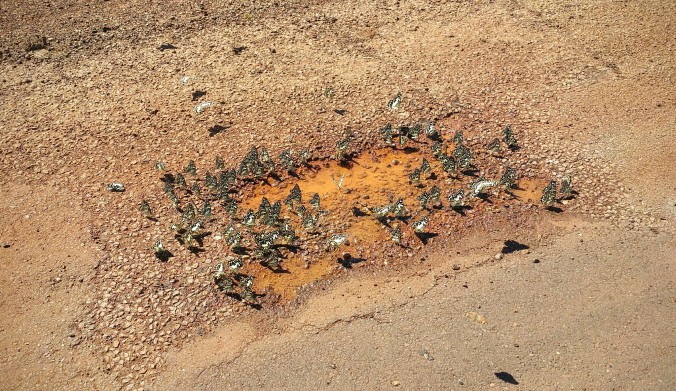 We paused for lunch at the Heartbreak Hotel and Rissa had her own up close and personal moment with a butterfly. 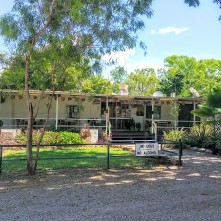 While we were there, we caught the news about Cyclone Debbie on the TV in the bar. Although it was crossing the coast south of Cairns, we were still glad to be well clear so we weren’t worried about roads being cut by floods.

Speaking of roads being cut by floods, not long before rejoining the Stuart Highway, we came across a 200m section of highway that was submerged. Although the fact that we had seen normal cars coming the other way gave me some confidence, the water was too murky to judge the depth or condition of the bottom and there was no way I was walking it (we were now far enough north to be back in croc country)!

It was only about 10 minutes before a local came along and crossed from the other side followed by a road train from our side. With far more confidence in the depth and surface we headed through and made it comfortably out the other side. While not the deepest, it is by far the longest water crossing we have had on the trip. 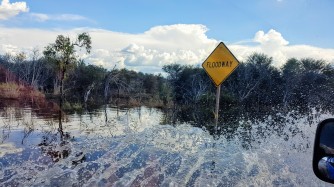 We rejoined the Stuart at Daly Waters and stopped at the Hi Way Inn for the night. Beautiful grass sites and a cool, covered swimming pool made for a wonderful final stop on our outback detour. We also saw more cane toads than anywhere else so far, the girls counted 26 hanging around in a couple of square metres outside the ladies bathrooms, they were having a great time feasting on the insects that were buzzing around the bollard lights! 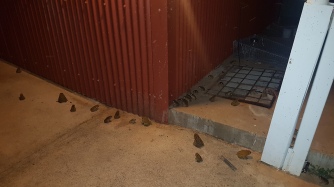 Tomorrow would be the last leg into Darwin and we were all looking forward to a break from the road!

4 thoughts on “Curveballs and Straight Roads”