It has been far too long but we are back! The lead up to the departure was much like our big trip. Adrian doing crazy hours and not sleeping (Due to work this time) and me getting things ready at home. With a 5am leave time planned we packed the last few bits but running tired we left just before 6. With everyone rugged up and drifting off to sleep, except me of course, we pulled out into the sunrise, with big smiles on our faces excited to be exploring our great country again.

This trip has an added element…Blu is travelling with friends! Spongebob (cause he’s big and square) had gone a day early to secure a spot, but we were to meet in Dalwallinu with The Kempmobile. After going through lots of roadworks we finally arrived and the timing was perfect . Our kids got changed out of their pjs and and then we all had a good leg stretch. There was a climbing frame from which our little monkeys were quickly dangling from the top. 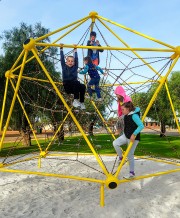 With a long day ahead of us we didn’t stop for long and aimed to reach Mount Magnet for lunch. With the tunes cranking, the husband snoring, and the kids viewing… I grooved and sang my way through the next few hours of red dirt, small shrubs, dead kangaroos and very long straight roads.

Pulling into Mt Magnet bought back so many memories. We had paused there for fuel on the way home from our big lap and it felt like not a day had passed. After filling up, we found the local park and let the kids play while we had lunch. Cautious of time we didn’t want to stop for long as we still had many kilometres ahead for the day.

One Truck, Two Truck, Big Truck Blue Truck, there were trucks of every shape and size as we continued on, to the point that it felt like being in our own Dr Seuss book. 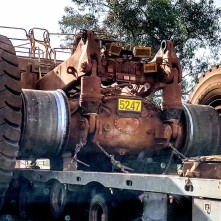 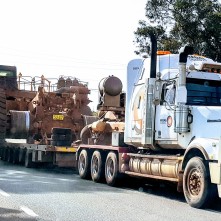 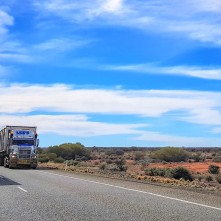 Trucks aside, the scenery was much the same and we arrived in Meekatharra around 4.30pm.

Mum and Dad had lived here when they were first married and it had been Mum’s first teaching post, so having a quick look as we drove in to find a toilet stop was really cool. We wanted to arrived at our planned stop for the night before the dark set in….this didn’t happen. It was a free camp at Bilyuin Pool right on the river bank and we longed to arrive. As the sun set our hopes of a daylight setup were fading over the horizon. As the dark set in it only made the finding of our spot harder and it consequently meant we got a little lost. With the message from SpongeBob to look out for a tyre we put on the LED bar and kept our eyes peeled.

It was the tiniest tyre but we found it and pulled in to set up. It was the Kempmobile’s first overnight quick pitch but they set up without too much hassle and we were soon all enjoying tea (Breakfast for dinner…Yum!) around a tiny campfire that the boys had set. As the cold set in, and we had no fire to warm by, we set a leave time of 7am and all tucked in for a well needed sleep.

July 1 Bilyuin Pool – Dale’s Campground (Karijini) It wasn’t quite 7, but not long after when we headed off. Before taking off we took a moment to appreciate the beautiful setting which we had camped alongside all night, while the kids hunted for the hidden “care package” that the crew of SpongeBob had left for them the night before.

Today was planned for a much shorter drive day but still was going to be around 6 hours. We made good time and pushed through to Newman for lunch, pausing briefly to stretch our legs at Payne’s Find (Which is home to many Minions!) and selfie at the Tropic of Capri….ummm…Apricorn.

We received a call from SpongeBob to let us know they had a secured a site in Dales Campground that we could all fit on…thankfully! We had lunch, which took longer than anticipated, and headed out for the last stretch. Pausing on the way out of town to check out a big haul pack which you could walk right up next to.

The drive from Newman to Karijini reminded us of coming out of Alice Springs or Mt Isa. The road seemed to go on forever and the last hour of the trip was when delirium set in. Over the 2 ways we played a few games but the cabin fever of 2 days on the road was taking its toll!

Around 4pm we rolled into Dales Campground and saw the welcome site of friends. We heard their harrowing tale of a night spent in the overflow camping area and the wait to get a site. We were all thankful to God for providing us a stunning spot from which to explore His amazing creation! We organised the long narrow site and set up while a cuppa was made by our wonderful friends. Never has a cup of tea tasted so good!

We tucked into bed under an awesome blanket of stars, with the anticipation of our explorations beginning the next day.