Monday morning we awoke to rain and lots of it! While we had planned to head to Derby, we thought better of it due to the wet tent, wet roads, a leak in the bed (Aaarrrrrgggghhhh!!) that needed sorting and general bleh way that we were feeling (probably as a result of a restless night on a gradually sinking bed). Instead we took a slow morning while the kids explored the creekbed and bush around the campground building bridges and forts (Something I loved doing growing up 🙂  )

Then we headed the short drive back into Launceston for lunch and a visit to the Australian Motor Museum. We admired the cars of yesteryear and enjoyed the stories behind some of them, including a Kingswood that had been left hanging with it’s front wheels over the edge of the Tasman Bridge when it was taken out by a ship in 1975! 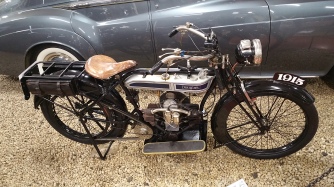 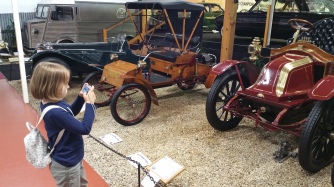 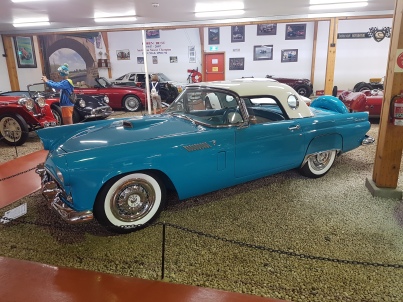 After a slightly less restless night (I made the mistake of assuming the first leak I found was the only one :p ) we awoke to a much more pleasant day and almost dry tent and headed for Derby. We paused for breakfast at a magnificent lookout over the countryside we would soon be travelling through and were very thankful we had given the drive a miss while the roads were wet the day before.

Derby is a town that is renowned for one thing; the Blue Derby Mountain Bike Trails! As we were a day behind, Zach’s stamina is still building and there is very little for non-MTBers (Clarissa & Chelle) to do in town, we only did one run down the hill. Some careful planning saw us decide on a run down Flickety Sticks, Devilwolf, Relics, Axehead and Sawtooth which would be mostly downhill,  fun for me and reasonably challenging for Zach. Chelle and Rissa shuttled us to the top, then it was on! Zach was tentative in the top part, walking some sections that I knew he was capable of, but he found his groove about halfway down… He also found a gift for sports photography! 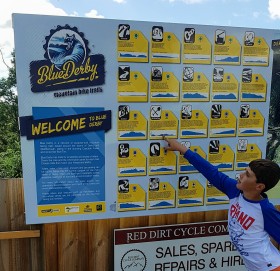 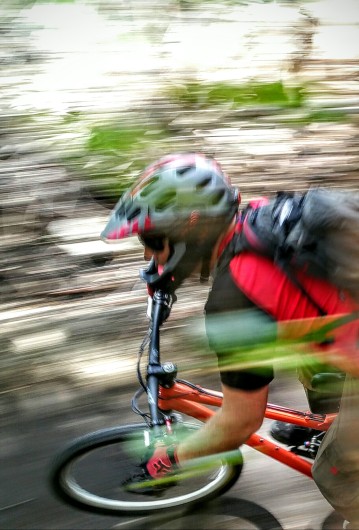 We arrived at the bottom with big smiles on our faces and Zach made some new friends in the local bike shop!

Moving on, we wound our way down through the forest and farmland toward St Helen’s for a late lunch,  on the way we couldn’t resist a sign offering pick your own blueberries for $12kg! 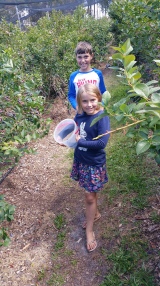 We set up camp for the night just off the beach at Bay of Fires and headed down to the water (I stayed behind for a while to rectify the oversight in the bed repair department). The kids had a great time pulling shells out of the waves in between breaks,  they are amassing quite the collection! 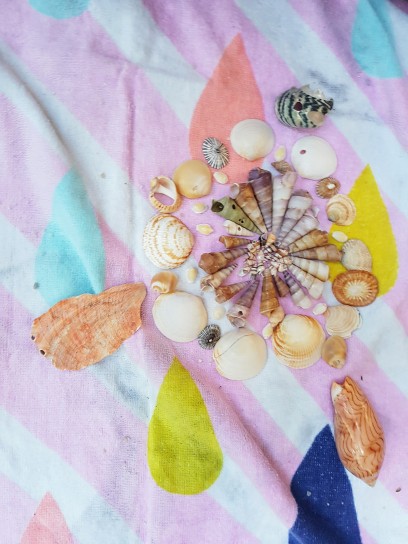 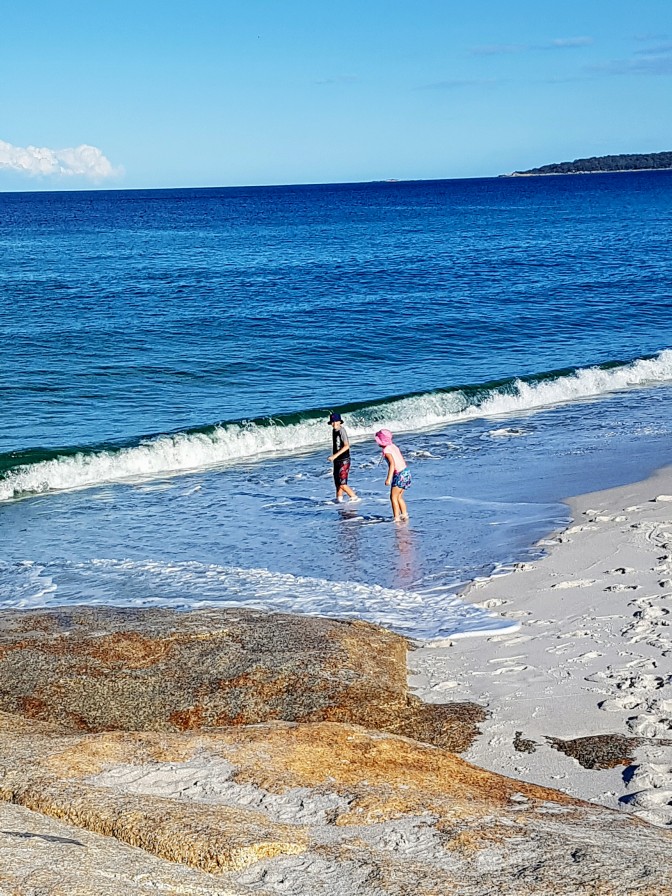 As we walked back toward our camp, we watched our first sunset over the land (every beachside campsite we have been at so far has had us on the western side of a gulf or bay)… It was slightly strange and really made us reflect on how far we have come in the last few weeks.

Our alarms sounded before dawn as a huge day lay ahead! We packed camp quietly as the sun rose over the water and headed into St Helens to update the blog (The no range thing makes blogging very tricky :p ), then we headed south for Freycinet National Park and Wineglass Bay.

It was lunch time when we arrived at the Wineglass Bay carpark, so we dropped the BBQ and had sausages in bread in the carpark to give us some strength for the trek that lay ahead.

The walk to the wineglass bay had beautiful views, lots of stairs and even more overseas tourists! Most of the visitors were only walking to the lookout at the top, so the walk down the other side was steeper and more rugged but much more peaceful. By the time we reached the bay, we were all ready to cool off in the beautiful blue water! It was freezing cold but sooo refreshing!

Once we started to loose sensation in our toes, we began the return journey, it was a slog back up the steep hill, but Blu had icy poles waiting for us in the freezer, so we pushed on in anticipation!

A slight detour inland saw us camped at the back of the Ye Olde Buckland Inn for the night.  A little bit of rain was forecast, but we didn’t worry about the fly on the tent as it can handle showers ok. We sat under the awning out of the rain and had baked veggies and crumbed Malibu chicken…mmmm a hot meal on a cold night…  When we went to tuck the kids into bed,  we realised that we had forgotten to zip up the the roof vents on the tent, so there was a nice big puddle right in the middle of the tent… Whoops! Fortunately the beds were still dry,  so we moped up, zipped up and tucked in for the night to rest our weary legs in our nice (properly inflated) bed!

8 thoughts on “Of Leaking Beds and Weary Legs”